AMIDST the backdrop of the Thomas A Robinson National Stadium, the Local Organising Committee (LOC) officially launched the hosting of the 50th CARIFTA Games to commemorate the Bahamas’ 50th anniversary of Independence.

Scheduled for the Easter holiday weekend of April 7-10, the region’s most prestigious track and field competition for junior athletes will be hosted here for the ninth time and all indications are that the Bahamas Government and the LOC are planning to make this one of the best ever.
Minister of Youth, Sports and Culture Mario Bowleg said through the title partner of the Oaktree Medical Center and Scotiabank, Aliv and Bahamas Waste, who are their corporate sponsors, plans are underway for the Sports in Paradise mandate that has been the hallmark of their government.

“CARIFTA Games, the Bahamas welcome you back home,” Bowleg stated. The games will have the Oaktree Medical Center as its title sponsor. Having pegged $300,000 into the LOC, proprietor Dr Don Deveaux said 2023 will be the Golden Jubilee of the Bahamas and it’s only fitting that they are a part of the major international sporting event to commemorate the occasion.

“What was once an idea, a dream, a seed in the mind of Sir Austin Sealy and company 50 years ago has built and strengthened relations between the island nations of the Caribbean,” he said. “Through Caricom, the track and field movement has grown exponentially, unearthing talented athletic gems and has created a powerhouse in track and field.

“As the title partner for this historic 50th edition of CARIFTA, Oaktree Medical Center is proud to assist our Bahamian and Caribbean athletes to ensure that they have the opportunities to grow, compete and win both locally and internationally.”

Deveaux said with his wife, the chief executive officer, the Oaktree Medical Center is more than just a medical center, but is a community center and their team stands with the LOC, the BAAA, NACAC, the government of the Bahamas and all partners for the future, not just for sports, but for the development of youth and their development. “Come go with us and let’s cross the finish line together,” said Deveaux as he pledged the Oaktree Medical Center’s commitment to making the 50th CARITA Games the best ever held.

Mike Sands, the president of the North American, Central American and Caribbean - the CARIFTA Games falls under their jurisdiction - speaking in a video presentation from where he was attending the World Athletics’ meeting, said since the games were formed in 1972, there’s been a stage created that allows the country’s most promising athletes to display their gifts and talent to the region before stepping out on the world stage.

“In these trying times, the CARIFTA Games is a beacon of hope where the world is coming out of the residual and the dramatic effects of the pandemic amongst other world- shattering events,” Sands said. “This is a gleam of hope and joy as we come together to celebrate, cheer and encourage our young athletes to push themselves to help develop and improve the world in which they live.”

The Blue Marlins Sports Network, according to Maycock, was officially launched as the radio network for the games as did their first live broadcast of the event. He noted that they will be the official radio station for the games, while Aliv will be the television station with the rights to cover the games. “We also want to make mention here that for the first time in the history of the games, we are partnering with a financial platform, Arawak X, that will provide the funding needed for the games.

Maycock also introduced the LOC’s mascots, the Blue Sharks, while Maryann Higgs, the first Bahamian recipient of the Austin Sealy Award as the Most Outstanding Athlete, was presented as the Mother of the Games and “Golden Girl” Pauline Davis Dame of the games.

BAAA president Drumeco Archer, still celebrating the announcements by World Athletics that the World Relays will be coming back to the Bahamas for the fourth time in 2024, said the Bahamas will be welcoming the best that the world has to offer.

“From the BAAA side, we are ready,” Archer said. “If you come to the track every day, our athletes are ready to put on a show for you the Bahamian people.”

Archer, who will be seeking another four-year term in office when the BAAA goes to the polls for their election of officers on Saturday, commended the Bahamas Olympic movement, the Bahamas government, the LOC and the Bahamian public. “A lot of work has been taking place in a short period of time,” he pointed out. “I will leave it right here and I would say let’s get ready to rumble. Let’s put on your running shoes and let’s get ready for the 50th edition of the CARIFTA Games.” 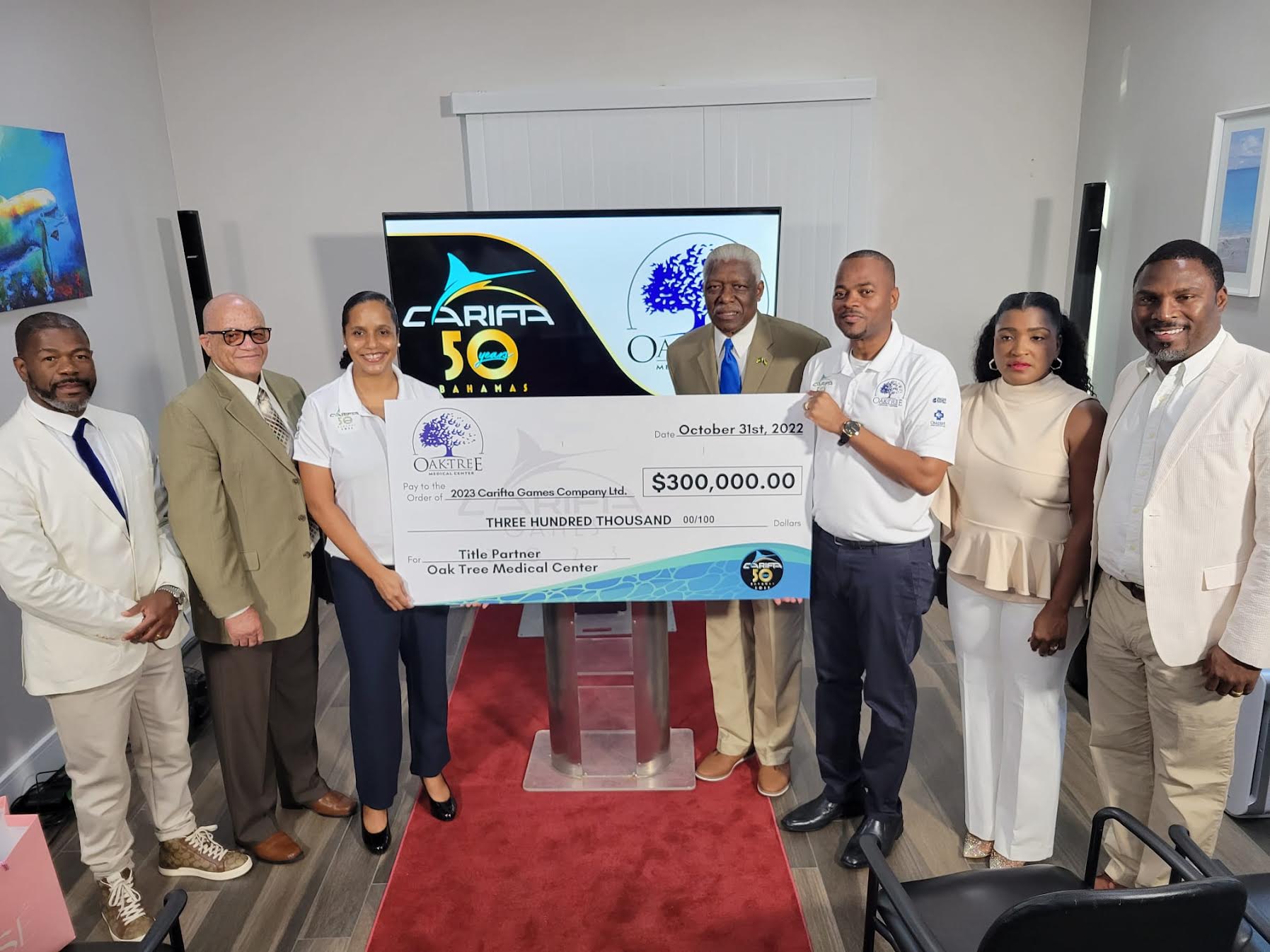 NASSAU, The Bahamas – “It's historic in many ways and very admirable that Oaktree Medical, to my knowledge and memory, it is the first time a medical institution has actually come on board to the extent to which Oaktree has and that warrants commendation,” noted President of NACAC Athletics Mr. Mike Sands at a recent press conference to announce Oaktree Medical Center as the Title Partner for the 50th CARFITA Games.

“The CARIFTA Games, for us, embodies the spirit of unity, strength, and teamwork. None of us here today can boast that we are self-made, or that we cross the finish line on our own. We stand as a people and developing nation on the shoulders of so many who selflessly gave of themselves to make this gem in the archipelago, The Bahamas, world class. When thinking about making a sound investment, some may say, why not in technology or other important areas? But for us, here at Oaktree Medical Center, we believe in not only caring and compassionate medical care but most importantly investing in human capital, investing in the human soul– the youth of this nation is the top investment.”

The sporting event of 2023 will take place Easter weekend, April 8th-10th as the country is poised to celebrate its 50th year of Independence.

CEO of the Local Organizing Committee of the 50th CARIFTA Games Mr. Lynden Maycock opened with the simple yet powerful prayer of Jabez for the enlargement of his territory and God granted Jabez’s request. “Only for his glory, he will continue to enlarge your territory [Dr. Deveaux] and even more and only for his glory. Today, I welcome Dr. Deveaux, Oaktree Medical Center and their entire team as part of our CARIFTA Games family.”

The 50th CARIFTA Games will draw thousands of track and field fans from around the Caribbean and the world, boosting sports tourism and the economy of The Bahamas. President of the BAAA’s Mr. Drumeco Archer, while thanking the Deveaux’s for being the ‘Davids’ of our community for slaying ‘giants’ of social decay and youth degradation, he also noted the power of track and field.

“Track and Field is a sport that is rich with culture and heritage but it's also a sport where we attract grassroots every day. Our reclaim is through corporate partners like Oaktree Medical to ensure that the life and line of this country survive because I think sports is the leveler that levels the playing field, that never denies anyone who is talented. The ambition of our Federation is to ensure that we not only produce good athletes, but we also produce good citizens,” said Archer.

As Title Partner for the 2023 CAFIFTA Games, Oaktree Medical Center has committed to donate $300,000.00 for the event and encourages corporate Bahamas to join forces with them to support youth development through sports.

“This donation today, is truly a sacrifice for us.  Kristi and I believe with all our hearts that success in life requires faith, hard work, and dedication, through God’s divine hand and presence anything is possible.,” Deveaux expressed.  “We believe that through God, the healer, we can begin to heal this nation through tangible, life altering events like the CARIFTA Games, here at Oaktree Medical Center, we are more than medicine, we are community. Come Gold with us and let’s cross the finish line together.”

Oaktree Medical Center (OMC), a world-class medical facility provides high quality, holistic, patient-centred, affordable medical services in a safe, caring environment. They provide customized care to meet the needs of each patient and health condition. OMC is focused on family values and its doors are open to serve the community.